Music, Powerful Testimonials Bring us to a Strong Finish


We finished our tour strong with stops in Olympia, Seattle and Everett, WA on March 1st and March 2nd.  Thanks to all of the excellent videographers in WA we have a bunch of great video from the events to share (see the Olympia stop here, and Jim Page's performance in Everett here).  The highlight of the three stops was a very well attended event at University Temple United Methodist Church in Seattle where Pastor Rich Lang opened up his Church’s Common Good Café for an unforgettable evening. 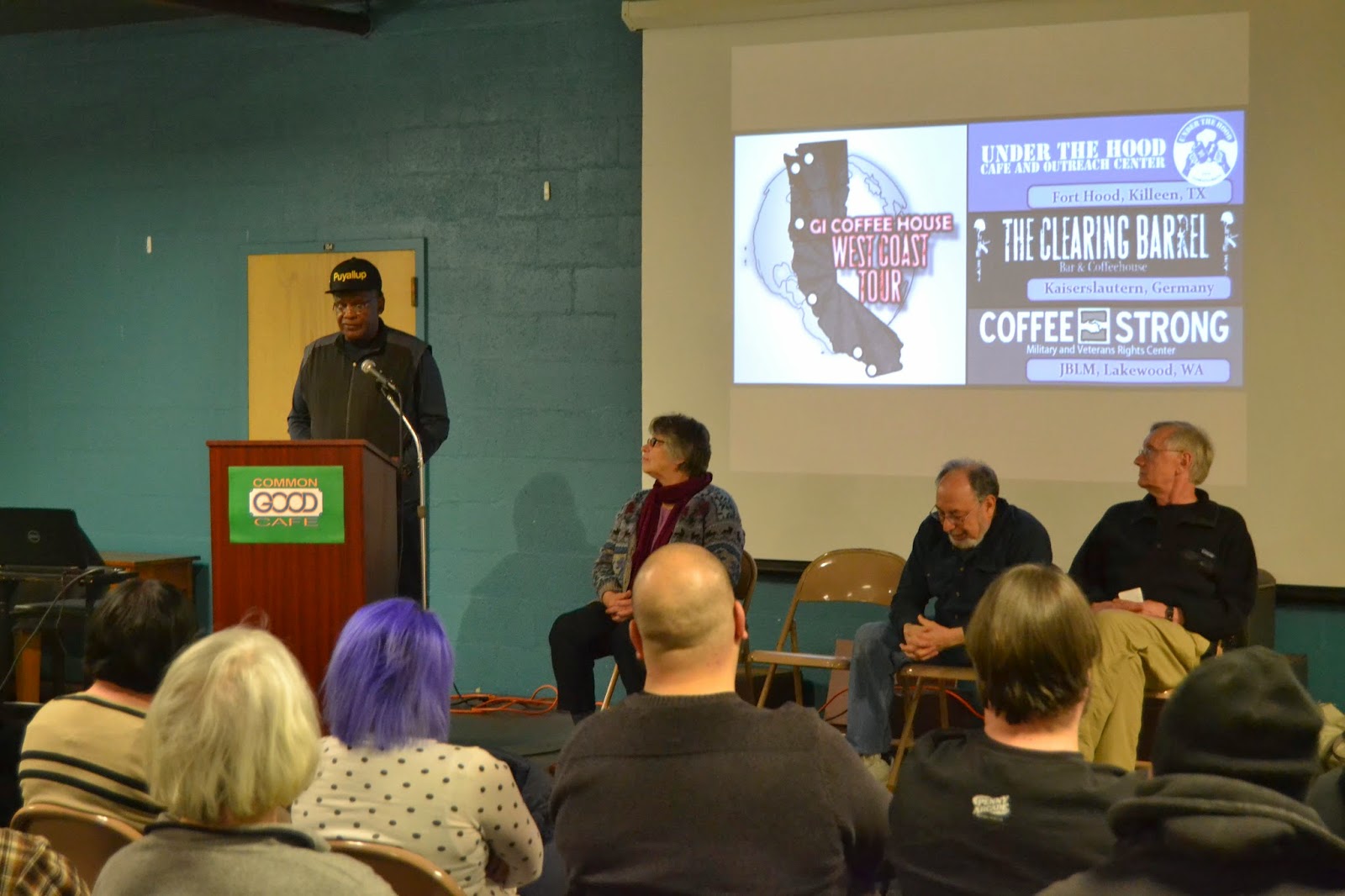 At all three Washington tour stops we were joined by participants in the Shelter Half, a GI Coffeehouse located in Tacoma from 1968-1974.  The Shelter Half was a center for the powerful GI and veteran resistance movement to the US war in Vietnam.  We got to hear stories from Lyle Quasim, Lois Thetford, Allan Poobus and especially Philip Kaplan who spoke at all three stops.  All four “Shelterhalfies” joined us in Seattle and shared some stories about their work at the Shelter Half, and what it still means to all of them forty years later.

After that we had staff from the Clearing Barrel and Under The Hood give their presentations, and ended the Seattle and Everett events with a powerful testimonial from Coffee Strong GI Rights counselor Sandra Sampson.  Sandra is a veteran of the US Army, and talked about her own experiences while in the Army and how if she had known about Coffee Strong what a difference that would have made for her. 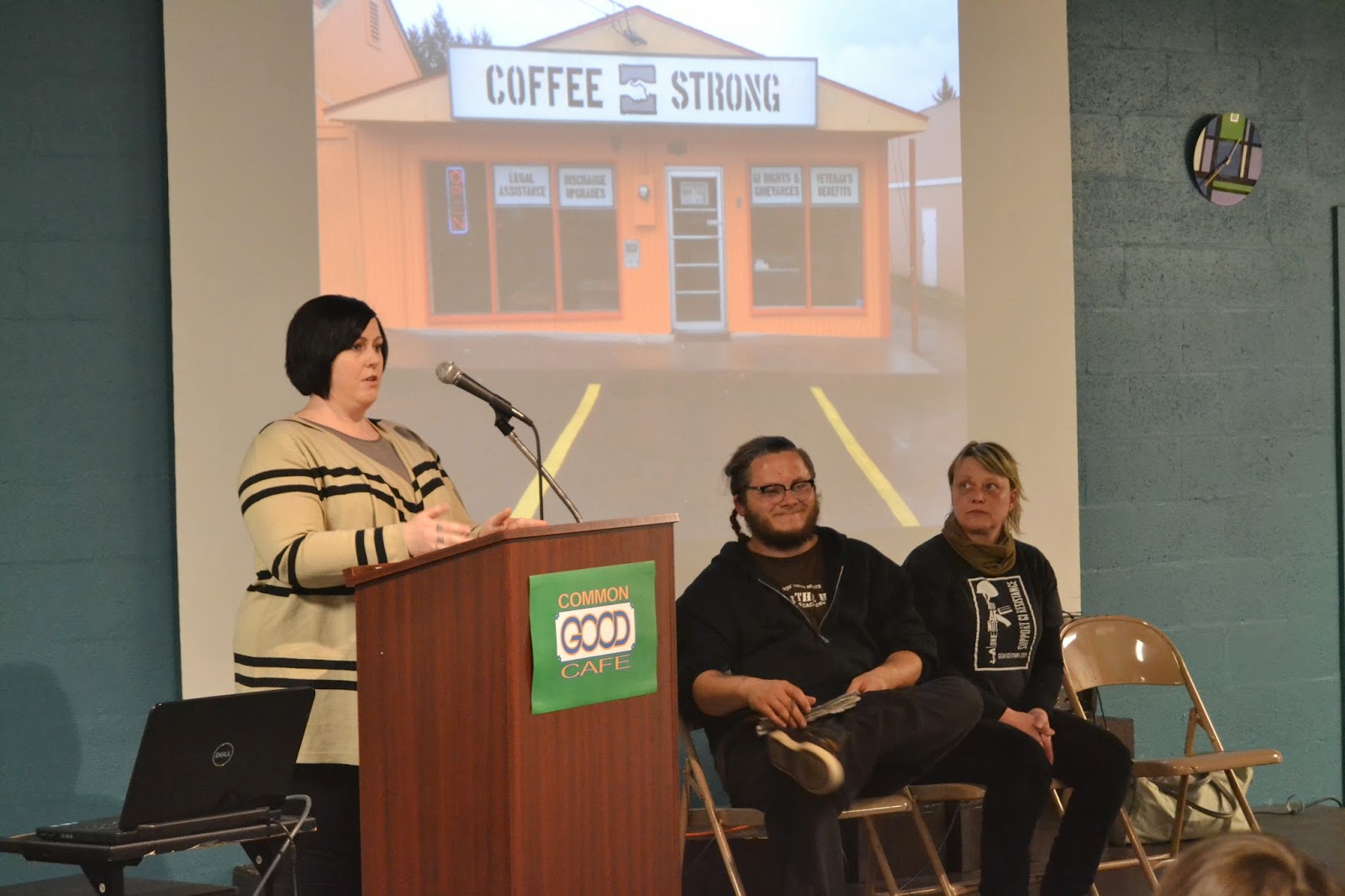 Our Everett stop also had some excellent musical accompaniment with Seattle’s own Jim Page making an appearance.  Thank you to everyone who helped with the Washington tour stops, including Western WA Fellowship or Reconciliation, Veterans for Peace Chapter 92,  Kaeley-Pruitt Hamm (Seattle stop MC and musician), Linda Newton (Everett stop organizer) and Maria Trevizo (Olympia stop MC).

Posted by Unknown at 5:44 PM No comments:

Arts Day in the Bay

On Sunday, February 23 the GI Coffeehouse Tour took a day to check out some of the local veteran's art scene. First, we Visited Veteran Alley, a mural project in the under represented community of San Fransisco's Tenderloin district. Many troubled veterans who have succumbed to drug use live in this district, known for its homeless problem, rampant drug addiction, and crime.The project is headed up by Amos Gregory, a Gulf War veteran, artist and activist. The project brings attention to issues affecting America’s veteran population. Among the topics depicted in the murals are the issues of PTS, TBI, MST, Chelsea Manning, addiction, deportation and more.

We also visited the Marin Headlands, just north of San Francisco across the Golden Gate Bridge. Once we drove through the mountain tunnel into the headlands area it was clear that this area was once a military installation. There, we had Tea with veteran artist Aaron Hughes as part of a performance based on his experiences in Iraq.

Posted by The Clearing Barrel at 4:15 PM No comments:

San Jose - Feb. 19
On Wednesday, February 19, the tour left Southern California and drove to San Jose, on the south end of San Francisco Bay. The San Jose stop was organized by members of San Jose Veterans For Peace and held at the San Jose Peace and Justice Center.  A young man from Taiwan who is studying at San Jose State University started off the program with several songs from the late, great folksinger, Phil Ochs, including “I Ain't Marching Anymore.” Doug Nelson opened the program with a short presentation of his book, “Making Peace With Military Post-Traumatic Stress” and then presented copies to the GI Coffee House Tour.

Gerry Condon shared a very brief history of GI resistance during the Vietnam War, noting that low morale and active resistance among enlisted personnel brought the US Army to a state of near collapse, forcing the US withdrawal of ground troops from Vietnam. Alex Bacon, Malachi Muncy and Meike Capps-Schubert told compelling stories of how they came to play leading roles in the GI coffeehouse movement of today.

About 30 people attended, including several GI hotline volunteers from Santa Cruz.  Members of the Military Law Task Force of the National Lawyers Guild attended and stopped in before the event.


Many thanks go to Phil and Anne Pflager of San Jose VFP, for organizing this successful event, for donating generously to the three coffeehouses, and for their great hospitality. Thanks also to Nancy Goebner, for hosting two of us at her home.
Posted by The Clearing Barrel at 1:10 PM No comments:


The first-ever Pop-Up GI Coffeehouse, Grounds for Dissent, was a great success last weekend as our tour made it to the Bay Area.  We packed the Veterans Media Center on Friday evening and all day Saturday with music, workshops, food and panels.  Thanks to all of you who are participating in the Coffeehouse Movement past and present, resisting militarism and building a just society.  We built community with great workshops that challenged us to think, to write, and to act while building solidarity. 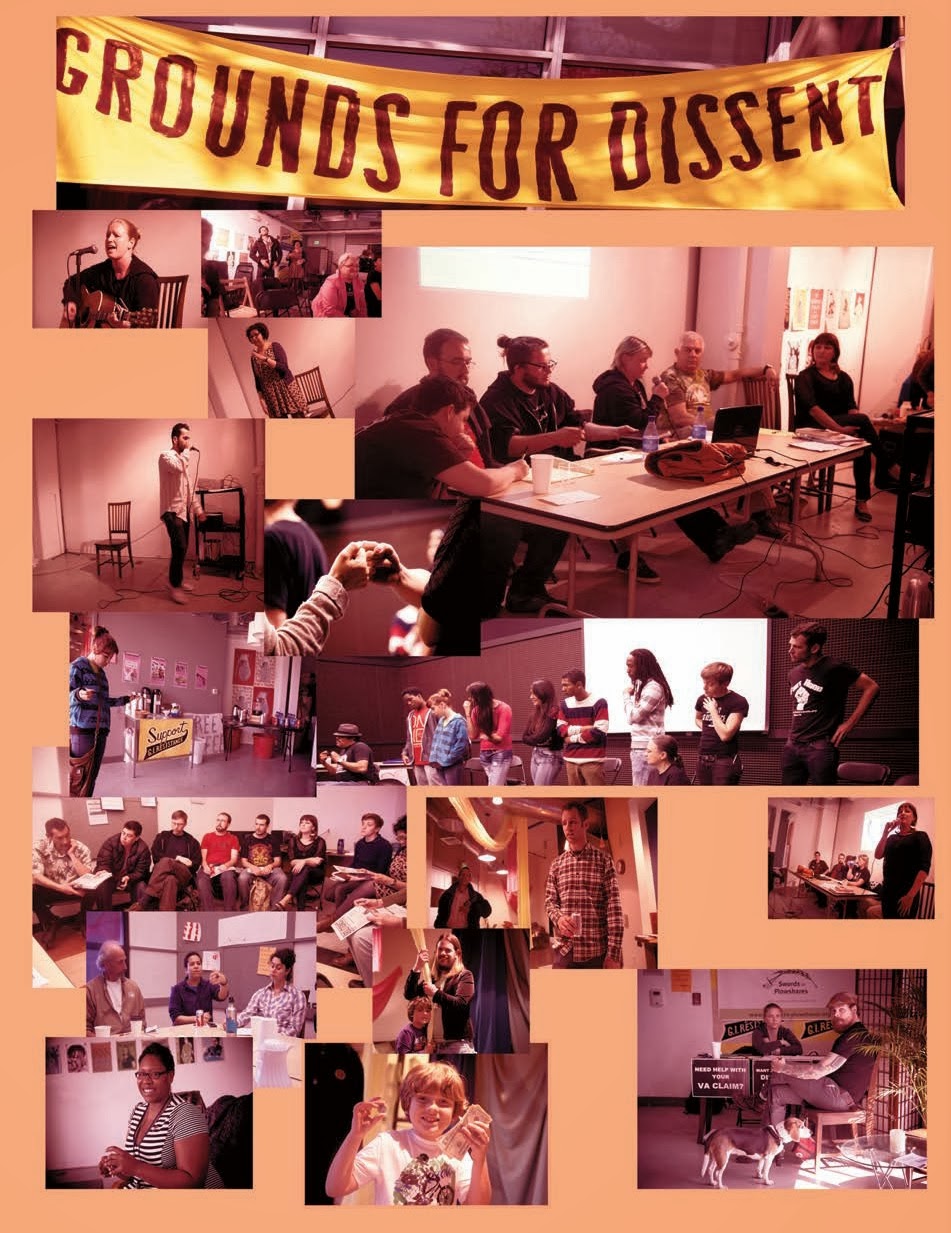 On Friday we started with some pre-opening flyering of the nearby bicycle commute where we invited riders to stop in for a cup of coffee and to learn about the weekends upcoming events.  After that we were welcomed to Grounds for Dissent and promptly hit the dance floor.


Saturday morning started out with a surprise visit from a big part of the Shelter Half Coffeehouse which was located in Tacoma, WA from 1968-1974, Lyle Quasim.  Lyle’s generation of anti-war service members and veterans provided much of the inspiration for these modern day GI Coffeehouses when we all learned the history by watching David Zeiger’s film, Sir No Sir.

All throughout the day on Saturday, Becca von Behren from Swords to Plowshares and the Military Law Task Force was in attendance to help veterans with disability applications and discharge upgrades.  Saturday featured workshops which included BAY-Peace sharing their Theater of the Oppressed program, a Warrior Writers workshop led by Aaron Hughes, and a Critical Resistance led session on the connections between policing, prisons and militarism.  After an evening panel that included tour participants and Veterans for Peace, we finished the evening with an open mic.

Thank you to Coffee Shop, Rainbow Grocery, and the Veterans Media Center for supporting Grounds for Dissent.  We’re also very grateful to the local organizing committee led by Civilian Soldier Alliance members with support from Iraq Veterans Against the War and Veterans for Peace members.

We've had a flurry of events over the past four or five days, including official tour stops in San Jose and a multi-day stop in San Francisco.  We've also had the opportunity to attend a couple of events closely related to the tour, including an art exhibition and an anti-drone mobilization at Fort Beale.  Today we're on the road for an event in Phoenix, OR  from 6pm to 9pm at the Grass Shack Hawaiian Cafe, 205 Fern Valley Road (Shoppes at Exit 24 shopping center).  The event is sponsored by Veterans for Peace Chapter 156.


With a day off tomorrow, we hope to get caught up on this blog with posts about our stops in San Jose, San Francisco and more.  In the meantime, here's some videos from the San Jose and San Francisco tour stops:

Posted by Unknown at 1:36 PM No comments: 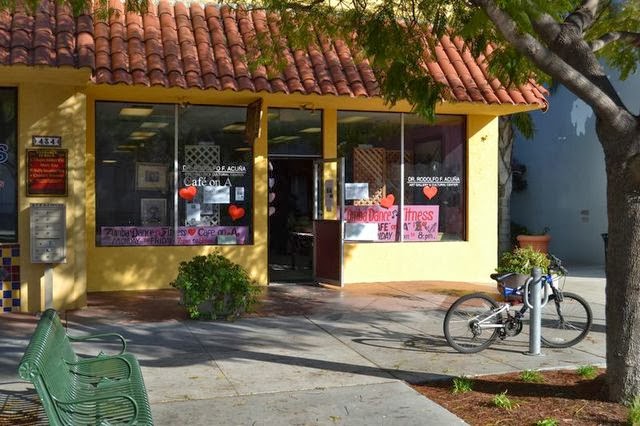 Thanks in part the efforts of the local VFP chapter Our stop in Oxnard at Cafe on A was great one. The Café on A / Acuña Gallery and Cultural Center is an educational, artistic, and cultural center dedicated to promoting communication, awareness, and community by honoring the inherent need of giving and sharing creative instincts. The Oxnard area is also home to Naval Base Ventura County 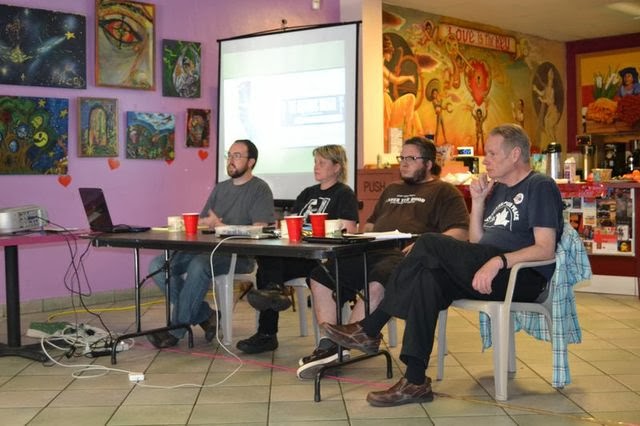 We were able to connect a local veteran's family member with local resources and support such as The Soldier Project.

Invite your friend to the Tour Stops in these areas!

Donate!
Posted by The Clearing Barrel at 1:04 PM No comments:

Before the tour stop event at the Culver City Peace Center in LA, we visited Arlington West Memorial at the Santa Monica Pier, where volunteers from the Santa Monica Veteran's for Peace chapter have constructed the memorial every Sunday for the last ten years. This weekend being the ten year anniversary of the memorial, volunteers are keeping the memorial up through the weekend. No doubt it is pretty emotionally heavy work. We really appreciate the crew's diligence to reminding the
pier's visitors of the cost of war.Here is a film about the project.


LA traffic challenged us but we made it to the Peace Center just in time. The support of the stops sponsors, LA Veterans for Peace, March Forward! and ANSWER LA, made this stop a good success. After our presentation we had a lively discussion about current military developments, including Obama´s "Pivot to Asia," the increasing US military presence throughout Africa, and the building of a deep water naval base at Jeju Island, strongly resisted by the local population.
Mike Prysner provided us with a home stay in the historic Alexandria Hotel in downtown LA now turned into low income apartments. The Alexandria was built in 1905 and its iconic Palm Court ballroom is a protected Los Angeles landmark. It  also is known for being the most haunted hotel in LA. Unfortunately we did not run into any of the ghosts
of two former Mafiosos, Larry and Gus, an angry young man in Charlie Chaplains old suite or a mysterious partially transparent woman in black wandering the halls around Rudolph Valentino´s chambers...


Posted by The Clearing Barrel at 1:11 PM No comments: